Most of us have used the word deshi, often without any real understanding of just what the term means. Many of us hearing the word think of the usual, poor translation of “student,” but the word really means something much more. In Japanese, the term for student is gakusei and the term for disciple is deshi. There is a difference.

Let’s take a look at the kanji for deshi. The word consists of two kanji, TEI, DAI, DE, which means “younger brother,” and SHI, SU, ko, which means “child.” In Kanji & Kana the meaning of deshi is “pupil, apprentice or disciple.”

But let’s dig a little deeper, into Nelson’s this time. Here DE (or Dai) includes such things as “younger brother, brotherly affection and faithful service to those older.” SHI in Nelson’s has the meanings of “viscount, master, child, male, fruit or seed.” In Nelson’s, the word deshi (teishi) is defined as “pupil, disciple, adherent, follower, apprentice, teishi: young person, teacher’s student-helper.”

Hmm, now we have some interesting concepts to work with.

Perhaps being a deshi is a little more involved than just attending class and being a “good” student. As we saw above, there is the phrase “teacher’s student-helper.” Could this simply mean being the senior student in the dojo? Or does it mean you’re on the way to being a teacher? What a thought...

Most of us, when we join a classical dojo, are told that we are expected to be more than just a simple student. We may even be told we are to be deshi or disciples, something many find a little daunting. For religious reasons some find the term “disciple” to be a challenge to how they were raised. After all, we probably didn’t want to enter into a religious community, especially one that may be very different than the religion we were raised in. I strongly suspect this is the reason that the real meaning of deshi is not explained to new students — along, perhaps, with some simple ignorance of the meaning of the word.

However, I think an understanding of this term and what it implies is necessary for a true understanding of the classical Japanese martial arts as well as our place in them. First, it is important to keep in mind that the purpose of a ryu is not to teach a martial art. “What? But isn’t that what we are doing?” you ask. Not really. The purpose of the ryu is the continuation of the ryu. It just happens that, in this instance, the ryu teaches a martial art.

As many of you know, most ryu don’t consider someone to be a true member of the ryu until they are at least shodan. Clearly, the time one spends as a mudansha is sort of a testing period, to see if one is ready to assume the responsibility of being a deshi of the ryu. Thus, we can see that a true deshi is someone the ryu considers worthwhile, rather than someone who thinks he has something to offer the ryu. From the perspective of the needs of the ryu, the ryu needs members who will work for the continuation of the ryu and not for their own fame or personal success. This is in keeping with the Japanese concept of what is good for the group takes precedence. In this case the group is the ryu.

In other words, ego is bad for the ryu.

Ah! A shift in perspective. A deshi is someone the ryu considers as a potential carrier of the ryu. Being a deshi then engenders some responsibility. You can’t simply go around just being a “martial artist,” but are a representative of the ryu.

Does this apply to the many non-classical martial arts some of you currently study? Perhaps not. I don’t mean to attack anyone’s art, but there is a very real difference between a school that essentially emphasizes fighting skill and one that considers its continuation to be of paramount importance, regardless of whether the ryu embodies kenjutsu, ikebana or whatever. There is a difference in mind-set and intent.

A deshi can only exist in a school that is a ryu. A ryu is defined as “current, flow, trickle, ooze, be swayed by, passage of time, descent, school, fashion, form, manner, system, class, order, rank and grade,” among many other definitions. In other words, we are looking at a deshi as being a potential carrier of the traditions of a family system that, in our case, just happens to be a martial art.

To truly be a deshi you must give yourself over to the needs of the ryu. Now, for a shodan there is not all that much to be expected, other than some basic skill and some basic dignity. But as you increase in rank you will take on more responsibility and must begin letting go of more and more of your individual desires for recognition. A good example of this is what constitutes an instructor. In many ryu one must be at least a renshi and in others normally at least a yondan. This requirement provides some time not only for the deshi to become comfortable with the seitei of the ryu but also to have developed some personal dignity.

Now I want to differentiate between a deshi of the ryu and a personal deshi. Obviously being a deshi of the ryu is paramount but one can also become a deshi of a senior. This is a separate and uncommon choice in which one decides to accept a senior as a mentor. This is not the same as being the senior student in a dojo, or even as having a lot of commitment to a sensei or dojo. It is a major, formal commitment of your time and effort to a senior. Becoming an uchideshi means entering into a relationship that is intense and personal in a way few can understand without having experienced it. It is important to note that the sensei in this relationship also has some obligations as well. Thus, such a relationship requires a mutual understanding and agreement — it’s a two-way path.

Boy, this is getting complicated. But then, who ever said Japanese culture was simple?

Let’s see if I can simplify it a little. A beginning student cannot be a deshi. It is not until that student has progressed to the shodan stage that he becomes a deshi of the ryu. Without a ryu there are no deshi. After that, as time goes by and rank increases, one becomes more and more enmeshed in the role of a deshi. In time it takes over. To be sure, a student does owe loyalty to his sensei and to the dojo into which he has been accepted (note the difference between being accepted and joining) as a student. But, being a deshi requires a commitment that many are never willing to make. This is what sets a classical Japanese ryu apart from the rest of the world of marital arts.

A discerning eye will see the difference. 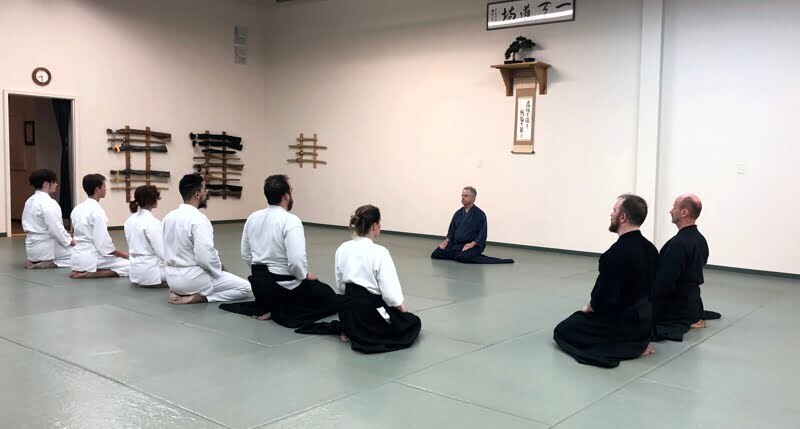